The house requires a reform, it is located in a privileged area, with lots of privacy and near the centre of the village, L'Ametlla del Vallès. It consists of a plot of more than 2 hectares and 557 m² built.

The country house is distributed on two floors and a third floor where there is a nice terrace. The house has a main entrance and a secondary entrance which was made from the last reform. On the right side of the house, a reform was made in the 20th century, together with the tower on the corner which corresponds to the enlargement made by Eugeni Xammar, when he was living in this house.

The house has 2 living rooms, 2 kitchens, 11 rooms, 3 bathrooms, 1 toilet and a garage, in addition to an outdoor shelter.

Exterior: Plot of 2 hectares, with terraces, porches and a barbecue area with a swimming pool.

Traditional cultivation of vines, almond and olive trees, which have disappeared, gaining more land for the pine trees.

*This information is subject to errors and is not part of any contract. The offer can be modified or withdrawn without prior notice. The price does not include the costs of the purchase. 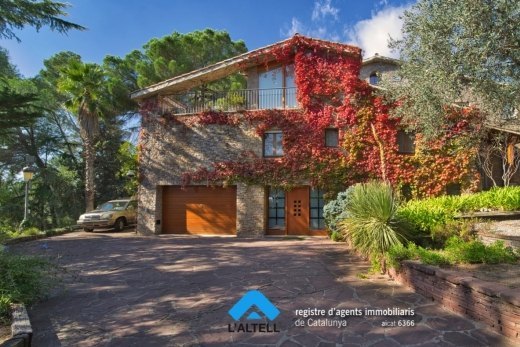